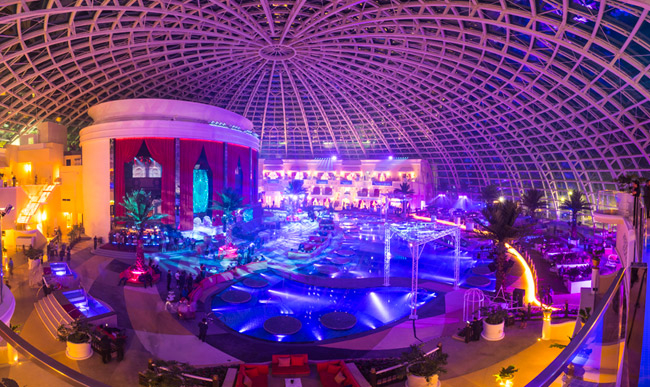 On December 15, 2017, the opening event for the indoor beach & night club "Cove Manila" was held at the "OKADA MANILA®" Integrated Resort (IR) operated by Tiger Resort Leisure and Entertainment, Inc. in Manila, Philippines.

Cove Manila is a 9,000-square-meter entertainment destination with an indoor beach club and nightclub situated inside a sprawling 30-meter tall UV-protected glass dome. The club is expected to be one of OKADA MANILA's key attractions along with The Fountain, which already made its debut in March 2017.

Cove Manila, the biggest beach club and nightclub in the Philippines, is home to Tony Andrew's Funktion-One high-resolution sound system and a six-ring kinetic chandelier capable of various visual and lighting effects that engulf the audience in a trance-like experience. The beach club has an exclusive indoor lounge area where guests can even enjoy the world-famous Manila Bay sunset.

Cove Manila will continue to attract guests as one of the leading entertainment facilities in the world.

■About OKADA MANILA®
In December 2016, the Company partially opened its $2.5-billion integrated resort, OKADA MANILA. OKADA MANILA, as one of the large integrated casino resorts participating in and licensed under the Philippines national project "Entertainment City" in Manila Bay Area, has been successfully expanding its operation to this day.
Strategically located within 10-minute drive from Manila's international airport and facing Manila Bay, one of the world's three best spots to watch the sun kisses the sea, OKADA MANILA will continue to deliver best possible experience as expressed by the motto "Discover Extraordinary" to our guests from all over the world.